‘You could have a great barbie out there,’ my brother yawns as he pulls up the window blind, letting the early-morning sunshine stream in. He stretches noisily and I hear comic squelches as he attempts to extricate his sleep-crumpled body from the marshmallow chair. His fidgeting last night suggested a restless sleep, but I am still hovering in between consciousness and ‘train-crash sleep’ myself, so I gently bat away his random chatter.

Mentally scanning my body, my feet still feel painfully cold, but there’s also a tightness that makes me wonder if someone has wrapped them up in Gaffer tape too. I shrug off this ridiculous notion; my brain is still playing tricks on me. I sense Dan shuffle over to my bedside, his silhouette ruffled and disheveled with crooked edges. His movement gently wafts sleepy smells over me and, still groggy, I reach out and touch his rumpled pajama bottoms. Since my sight spluttered back into life yesterday, I am being pulled towards those patterns and shapes that float around me. ‘Are those mine? ’ I ask him, but Dan doesn’t answer as he’s already lumbering off in search of the nurse’s desk, no doubt in boyish hope of a morning coffee. He returns moments later. ‘They laughed at me,’ he sulks. ‘Hardly surprising if you will insist on wearing my pink pajamas,’ I snigger.                                        ‘It was all I could find,’ he shrugs, his voice sheepish. I know this is very likely to be true, as my brother has a limited interest in clothing – other things are more important to him.     As I start to shift in the bed I feel incredibly stiff. This is becoming a common occurrence upon waking up. Dan hovers protectively when I start to slide off the bed, worried that I might crumple to the floor. I know I am being bloody-minded, but I still refuse any help. My right foot is dragging on the floor as I shuffle along, but this morning I don’t care.            Dad arrives early to take over from Dan, and I am left to my own toilette this morning. My father lives in South Africa normally, and only spends summers in Britain. After three months here he is due to fly home very soon. My illness, unexpected for all of us, is causing him some distress as he would rather stay on and help.                                                        Lying on my bed having only dared a cursory wash in the sink, I am worn out again. Slowly negotiating myself into the bathroom, even with my newly acquired stick took a huge effort. Pushing myself back up onto my elbows I ask Dad what he can see out of the window. Sighing and shutting his laptop lid, he walks over and looks out, ‘Well, it’s a bit strange, actually. There’s this huge balcony with railings all around it, and buildings in the distance.’ ‘Ahh,’ I smile to the ceiling. ‘Perfect for a barbeque, then.’                                                              I can’t see Dad’s face, but I can sense his puzzlement.

It wasn’t until I regained some of my sight and could see a photograph of the marshmallow chair that had been dragged into my room at St George’s hospital, that I could smile and understand its comical nickname. Akin to a 1980’s reclining airline seat, its softly padded seat did indeed resemble pink marshmallow. Devoid of sight, I listened to my family manoeuvring themselves (in varying levels of dexterity) in and out of that chair for the two weeks I was there.

It took 3 days for me to go blind completely, and to lose the use of my hands and feet due to a sudden and rare neurological illness. But, it would take over a year for my sight and movement to return. It did return – but not in the way any of us might have expected – and my visual odyssey – for that is what it was – started me on a journey of discovery I could never have expected. 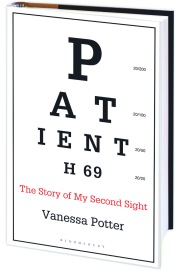 Enter PATIENT at the checkout on Bloomsbury.com to receive 30% off Patient H69: The Story of my Second Sight by Vanessa Potter.